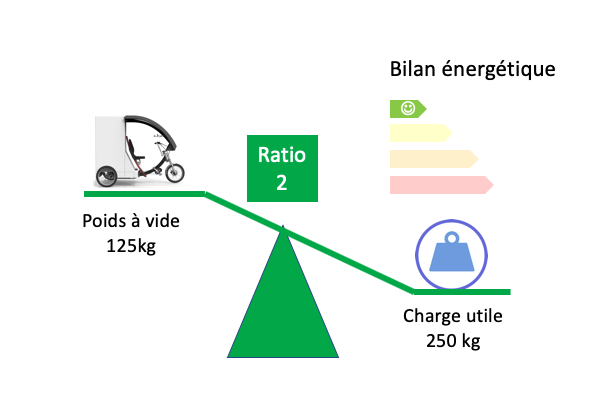 The weight is an important parameters to consider while choosing which cargo bike to buy. In fact, you have to consider the tare weight of the cargo bike. Another important criteria is the load capacity or payload.

To be compliant with the EU regulations, the tricycles need to be equipped by an electric assistance. For this latter, as any electrically assisted bike, the maximum power limit is 250W.

Above 250W, the cargo bikes, are not considered as “electrically assisted” anymore, but as motor vehicles. Because of that, they don’t have access anymore to bike paths and the driver is required to have a motorcycle insurance.

That brings to a lot of constraints when the engine power exceeds the limit of 250W. This, crowns the cargo bike with power up to 250W the best way of transport in the city center. This power allows an electric assisted cargo bike, to easily reach 25km/h and to climb hills up to 20% inclination. All of this is possible thanks to the extreme lightness of the box bikes. In fact it is around 20kg for the bike itself, 5kg for the battery and up to 100 kg for the driver. That gives us a total of around 25kg only for the bike and 125kg driver included.

Cargo bikes are always heavier than normal bikes. But they still have the same power limit when it comes to the electric assistance. This weight, impacts its top speed and its capacity to climb hills.

In the end, what’s a good weight for a cargo bike?

The Yokler U has been designed to offer our users the best compromise between weight, payload, speed, and ability to climb hills.

Yokler U is a super-efficient cargo bike, that allows transporting 150kg of goods and a driver up to 100kg, and that means 250kg of payload!

It’s 2 times more than its tare weight, which is only 125kg. Just as a comparison, a standard car weights 1 ton and can only transport 500kg.

Our Yokler U, allows you to reach 20km/h. It’s enough if you use it in the city center where the cars’ average speed is 16km/h considering traffic congestions.

With a normal pace and a payload of 100kg,  the cargo bike can easily climb hills up to 10% inclination.

In the vast majority of cases, these performances allow you to go through all the tasks that the cargo bike is supposed to, such as the delivery in the city center, in the range area of a neighborhood shop.

That’s the reason why more and more convenience shops decided to use our delivery bikes for their home delivery services.

But if you don’t know which cargo bike suits you the best, check out our other articles about sizes and incentives in both France and Europe.