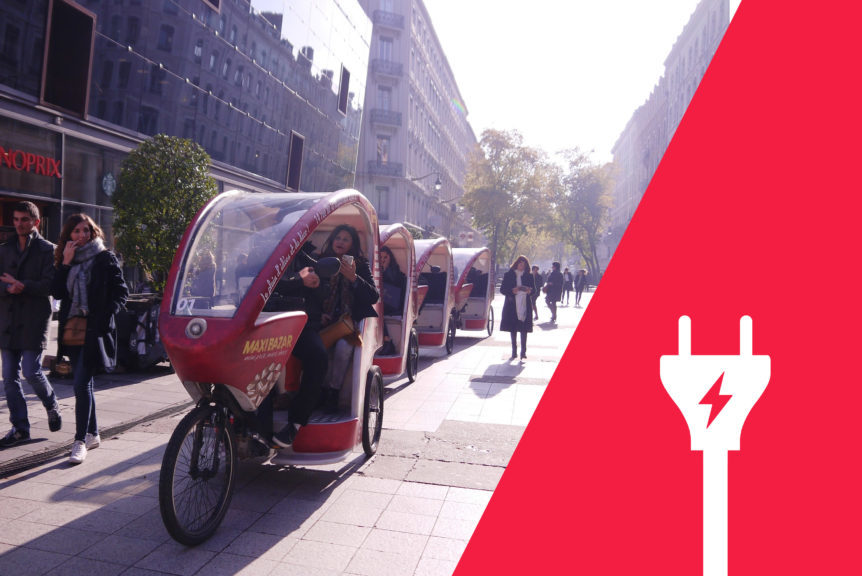 For several years, pedicabs have invaded our city centers for uses as diverse as tourist trips, delivery of goods but also waste collection or street food.

The European directive 2002/24/EC states the criteria for an electrically assisted bike to be allowed to circulate on the public highway:

The problem is that some of the uses of the pedicabs would require a power greater than 250W.

Indeed, if 250W are way enough for a bike that is only transporting one person (the driver), a pedicab is able to carry 3 persons at the same time! Not to mention that the weight of the pedicab itself is over 100kgs (220lbs), when a bicycle weight is around 20kgs (44lbs).

Therefore, the temptation is great for pedicab users to over-motorize their vehicles, by installing kits of 500W or more, especially as the technical solutions are existing.

Yokler strongly advises you not to overpower your pedicab because the risks are very important, especially with regard to insurance.

The risk arises in particular in the event of an accident and investigation on the part of the insurer who may refuse to cover you.

Some resellers or manufacturers unscrupulous do not hesitate to make false documents of conformity with engines whose power exceed the authorized limit. Not only does this engage their responsibility, but worse, their customers would find themselves uninsured in the event of an accident. A bit like if you buy a counterfeit at a quarter of the real price, by pleading good faith.

If you are considering a professional and peaceful use of yours pedicab, you should not take such a risk.

How Yokler solved this problem with its exclusive motor kit?

On your Yokler, the engine is not located in the front wheel of the vehicle like on the vast majority of low-end electrically assisted pedicabs. Our electric assistance is  cleverly placed at the rear of the chassis, with a special set of sprockets. The pinions act as a lever arm, which considerably increases the available torque while remaining within the 250W limit. In a way, you benefit from a much more powerful engine while remaining compliant with the law. It was enough to think about it! 😀